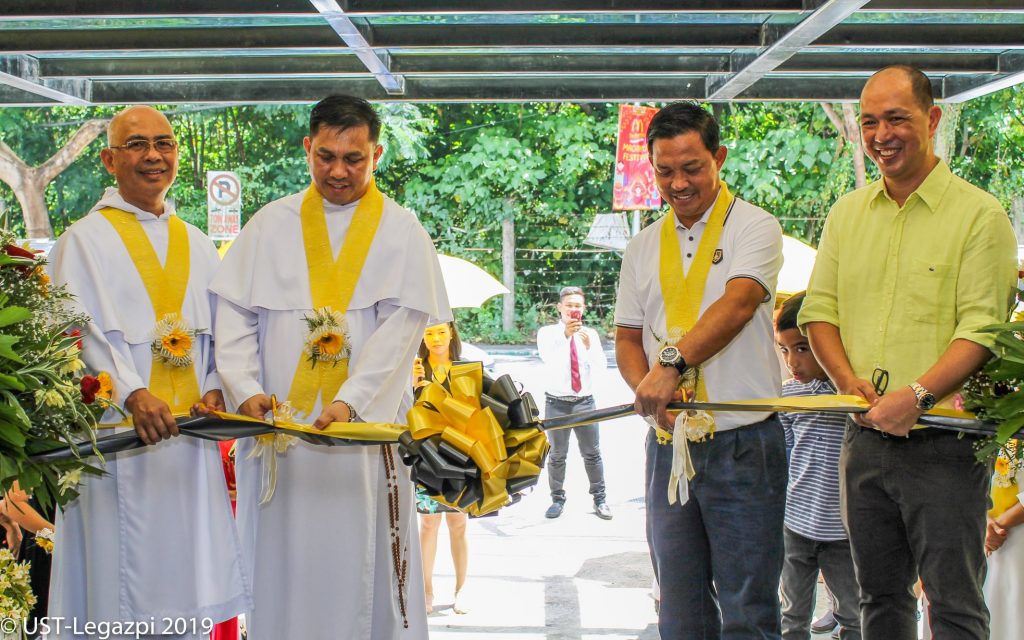 University of Santo Tomas-Legazpi, until recently Aquinas University of Legazpi, is a Catholic higher educational institution in Legazpi City, Albay. Known as the Dominican University of Bicol, UST-Legazpi can trace her beginning on June 8, 1948 when Don Buenaventura de Erquiaga opened the portals of Legazpi Junior Colleges at a modest site with a two-story building on corner Rizal and Mabini Streets in the port district of Legazpi City. About two years later, the school had already expanded to what is now the Peñaranda Campus along Peñaranda and Gov. Forbes Streets, this time renamed Legazpi College and offered elementary, secondary, vocational, tertiary, and graduate studies.

On July 1, 1965, Legazpi College became a Dominican educational institution; Rev. Fr. Ramon C. Salinas, O.P. was the first Rector. With a Dominican brand of education made available locally, enrollment grew; thus, to accommodate an increasing population, the College had to acquire a 32-hectare site in Rawis, two kilometers from the Peñaranda Campus. On March 7, 1966, the cornerstone of the first building in Rawis was laid. On March 8, 1968, the Honorable Secretary of Education Carlos P. Romulo elevated Legazpi College to the status of a university. On August 30, 1968, Honorable Acting Secretary of Education Onofre D. Corpuz signed the University Charter: Legazpi College would henceforth be known as Aquinas University, the first Catholic university in Southern Luzon.

Aquinas University of Legazpi or AUL was a household name not only in the city that bears her name but also in Albay and even in the neighboring provinces and regions since the late sixties. However, during the 10th Chapter of the Dominican Province of the Philippines in April 2012, a plan to integrate Dominican educational institutions to follow only two “traditions”, namely, Santo Tomas and Letran, led to the change of name such that during the Baccalaureate Mass in April 2014, the announcement made by Fr. Ernesto Arceo was received with warm anticipation. On September 12, 2017, Securities and Exchange Commission (SEC) Region V Director Marylou Duka-Castillo signed the Certificate of Amendment: the revered name AUL has to be retired to the archives to give way to UST-Legazpi.

UST-Legazpi offers pre-elementary, elementary, Junior High School (General Curriculum, Special Program in the Arts, and PAASCU Level III-candidate Science High School), all four tracks in the Senior High School, and twenty–three (23) programs (in the College of Arts, Sciences, and Education; College of Business Management and Accountancy; College of Health Sciences; and College of Engineering, Architecture, and Fine Arts) – the newest of which are the UST Manila-supervised BS Pharmacy, the first and only program in the Region, and BS Medical Technology – all based at the Rawis campus. The Peñaranda campus hosts the College of Business Management and Accountancy, College of Law, Graduate School, and Center for Continuing Education.

In the seven decades of her existence, from Legazpi College, then Aquinas University of Legazpi, to UST-Legazpi, tens of thousands of the youth and the young professionals of Bicol have passed through her venerable portals and many realized their full potential to soar high and soar beyond.